Many municipalities and councils are under increasing pressure to recycle waste. The Flipscreen screening buckets are at work in many countries around the word solving this problem. The materials being transformed by this screening bucket come from building rubbish, green waste, excavation spoil, rotor mill, ashfelt shingles, trenching material and quarries.

Building rubbish has an average 10% dirt content. Some municipalities Flipscreen the waste as it comes in and either export the “dirt” or use it as topping on the land fill, both of these practices help reduce the amount of land fill and retain valuable air space.

Green waste is commonly composted at municipality facilities as part of the recycling operation. Flipscreening the fully decomposed waste turns messy rubbish contaminated compost into a salableproduct without the need for large space hungry and expensive screening plants.

Excavation spoil; this stone, rip-rap, or hardcore material is often two valuable materials mixed together creating an expensive waste liability. Flipscreening, using the patented screening bucket, out the dirt for clean fill will render most of the sample reusable, while separating large rocks from small after a five minute screen change can produce rocks for gabion baskets and other drainage applications

Rotor mill, ashfelt shingles; when sized by a Flipscreen screener bucket, this material can be reused on road projects and also makes excellent gravel topping which after rolling and exposure to hot weather will form a partially sealed surface perfect for side roads and extended yard operations

Trenching material including foot paths and ashfelt is commonly brought back to the depot, Flipscreened and then the fines sent back to the same job or stock piled for the next to be used as trench fill, making large savings on imported materials while eliminating the waste

Quarries; In municipalities which have quarries it is often the case that to screen aggregate there needs to be a minimum of five to eight thousand ton to be screened before it is viable to bring in large portable screeners. With their Flipscreen screen bucket, municipalities can send a carrier machine to screen and load as little as a thousand ton in half a day. This gives greater flexibility to the project managers allowing them to solve small problems without being faced with large minimum screening rates

Along with these specific applications, the great benefit of a Flipscreen screening bucket in a municipality setting is that it can do not just one of these jobs but all of them, making it one of the most useful machines in the fleet. 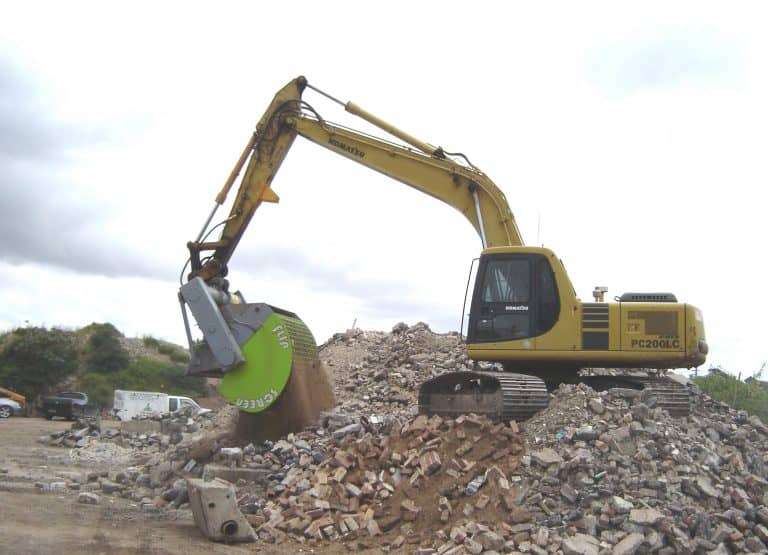